The 3rd Annual Homecoming Expo is primed and ready to overtake centre campus on Friday, September 25th from 11am - 4pm, spread out over BSB field. The Expo will feature live music on stage beginning at noon, as well as Homecoming t-shirt giveaways, a Ferris wheel, food trucks and a celebration of many of the unique services and groups within the McMaster University community. Some of Hamilton’s best food trucks will set-up next to the Nina de Villiers garden, serving from 11am until the close of the Expo. The Ferris wheel will be located directly behind the food trucks, between Hamilton Hall and BSB. Shortly after 1:00pm, Coach Stephan Ptaszek of the McMaster Marauder football team will take the stage to lead a Homecoming rally, joined by Marauder athletes from a number of sports.

As the Homecoming Expo winds down, the party heats up at night with The Sheepdogs. Doors open at 8:30pm for the show featuring the Juno award winning rock back and special guests the Elwins. The concert will take place in Sport Hall of the David Braley Athletic Center (DBAC). Tickets are on sale at Compass, beginning September 15 at 9am. For those interested in both the concert and the football game, Compass will have combo ticket packs available for under $35 tax included! Concert only tickets for students are $20 (+HST).  The concert is an all-ages event for McMaster students only. A limited number of guest concert tickets will be available at Compass for $25 (+HST). All guests (non-Mac students) must be 19+ and signed in by a McMaster student who is also 19+.

The festivities continue over the weekend, with the McMaster Marauder football team playing host to the York Lions at 1pm on Saturday, September 27th inside Ron Joyce Stadium. Tickets for the game are on sale at Compass for $15, or get a football ticket with the aforementioned combo pack with a Sheepdogs ticket for under $35 tax included. A free chili lunch starting at noon, sponsored by the Alumni Association, will take place before the football game. Finally, the men’s rugby team will face the Waterloo Warriors at 5pm on the Back 10 field.

In addition to varsity sports, Saturday will feature anniversary celebrations for several McMaster residences, including a barbecue lunch and drop-in residence tours. Also, campus will celebrate the 85th anniversary of The Silhouette.  Details can found at www.mcmasterhomecoming.com.

The action doesn’t stop on Sunday, as there are three Marauder games on the docket. Both the McMaster men’s and women’s soccer teams play their Laurier rivals. The women play first at 1pm while the men play at 3:30. In addition, women’s rugby team plays Trent at noon.

Homecoming is a collaboration between McMaster Alumni Advancement, Athletics & Recreation and the McMaster Students Union.

For a complete list of Homecoming related events and information, please visit www.mcmasterhomecoming.com 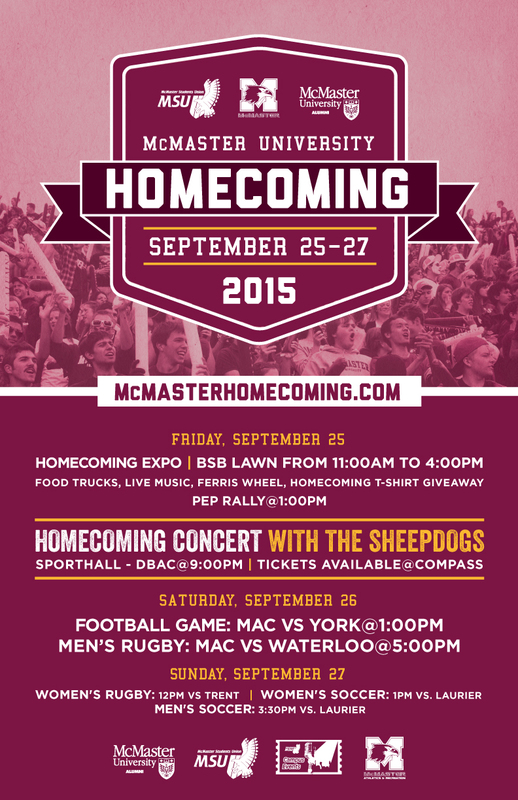 Exhibition: Instruments of Exchange: Coins from Antiquity to Today