In September of 2017, the Student Representative Assem­bly received and subsequently passed the MSU’s 2016-2017 au­dited financial statements, as pre­pared by KPMG. The complete audited statements of the MSU can be viewed here. The MSU maintained its healthy financial position in fiscal 2017, following fiscal year 2016 in which the MSU made significant investment in student life.

The 2016/2017 audit reflects an MSU that is in a healthy fiscal state. There is a sturdy reserve in the operating fund, within the limits set out in Corporate Bylaw 3 – a policy that ensures responsible capital growth. There is approximately $3.4 million in the operating fund reserves, which represents 128% of the total operating budget for one year. In addition, the organization has a total reserve of $6.4 million, representing 50% of the overall annual budget. The MSU has a strong balance sheet that provides stability and the flexibility to invest and grow. That said, potential future budgetary impacts include increases to minimum wage and costs associated with the opening of the Student Activity Building.

The MSU’s operating fund produced a surplus of $115 000, which represents 4% of the operating budget. Across the entire organization, including the operating fund, along with the health & dental funds, the MSU produced a surplus of $805,981 for the year. This number translates to 6% of the overall budget. At the department level, costs and revenues were managed very well and don’t represent the driver of the surplus. The largest contributing factor to surplus was the success of the MSU’s investment portfolio, which provided impressive returns compared to the previous year. There was a gain in the value of the MSU’s investments by approximately $660,000 compared to a loss in value of $114,000 in the previous fiscal year.

The other significant contributor to the surplus was the $495 000 surplus in the health and dental plans, representing 27% of the health & dental budget. To reduce this surplus, the health plan premium was reduced by 4% in Septmber of this year. In addition, student benefits were increased through the provision of the new Student Assistance Plan (SAP). SAP provides students access to 24/7 psychological and legal counselling over the phone through a toll-free call centre, along with multiple other benefits.  Moreover, the organization will continue to evaluate future student-life enhancements, the impending implementation of OHIP+ and other potential savings for students in the 2018 fiscal year. 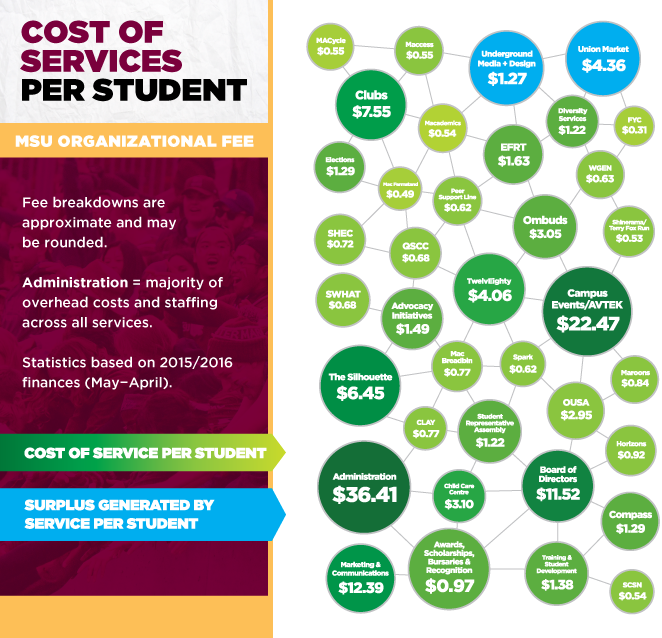 Posted in: MSU Departments & Services, Board of Directors, General | No comments yet

Exhibition: Instruments of Exchange: Coins from Antiquity to Today