The votes are in and the results have been ratified by the Elections Committee. Chukky Ibe won the 2017 MSU Presidential election and is President-elect of the McMaster Students Union. The President takes office on May 1, 2017 but will begin the transition process in the coming weeks.

The Elections Committee, charged with overseeing all elections of and within the MSU, has completed the campaign evaluation process by assessing fines and addressing complaints levied against candidates. Results are considered unofficial at this time, as all candidates have five business days to appeal their fines and contest the results. Appeals would be heard first be the Elections Committee, and a subsequent appeal would be heard by the Electoral Appeal Board. Decisions of the Electoral Appeal Board are final.

Round by round breakdown of results: 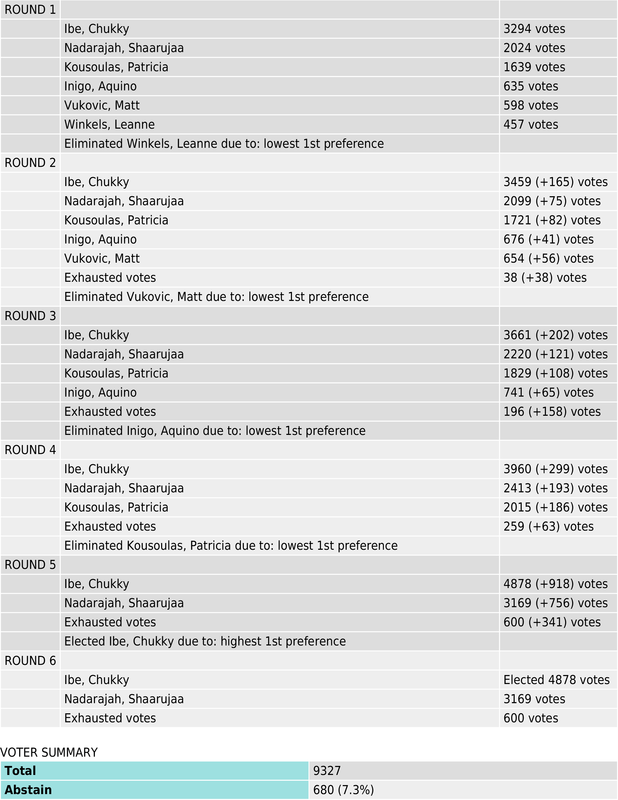 Campaigning has officially begun! Here is some information about the 2017 MSU Presidential Candidates.

If you're interested in running for MSU President, you can find all the necessary documents below, including the nomination form (hand in to  MUSC 201 with payment by Thursday, January 12, 2017 at 5PM) and rules. Also check out our How Do I Run? page for a how-to guide!

Complaints can be handed to the Returning Officers, MUSC 201, or e-mailed (as a PDF) to election@msu.mcmaster.ca (with title: YOUR NAME complaint against COMPLAINEE NAME) and attached evidence.

The MSU President is elected annually by the MSU membership as outlined by the procedures in the MSU Constitution and Bylaw 10. The elected candidate will hold office from May 1st to April 30th. The President may carry a course load of not more than three (3) units per academic term. This course load restriction may be waived by a two-thirds majority vote of the SRA.

Email the Returning Officers at elections@msu.mcmaster.ca for more information on the election.

Former MSU President, Mary Koziol created a guide on running in MSU elections, focusing on presidentials. This guide includes Mary's insight as well as insight from other students who have participated in elections.